Click HERE for a printable version of the Introduction to Deuteronomy

You can find all the studies under the Resources>Growth Group Studies tab at the top of the page.

When we pick up the story of Israel at the beginning of the book of Deuteronomy, we find them camped on the plains of Moab, preparing to enter the promised land of Canaan.  (See Fig. 1)

The book consists mostly of three sermons or farewell speeches by Israel’s leader, Moses, which are all about preparing the people to enter the promised land.

In these speeches, Moses reminds the people of Israel how they got to where they are.  Of the way God rescued them out of slavery in Egypt.  How He provided for them in the wilderness, despite their constant complaining.  He reminds them of the covenant or agreement God made with them back at Mt Sinai 40 years earlier, and of their complete failure to be obedient so far.

And he calls this new generation of God’s people to uphold their end of the deal, unlike those before them.  He calls for love for and obedience to God to shape the way they will live once they settle in Canaan.

Moses wants the people of Israel to make a decision; to choose between obedience or disobedience, which will result in either blessing or curse, and ultimately, between life and death.  And he urges them famously a little later in Ch30 – “NOW CHOOSE LIFE.”

Sadly, Moses recognizes that Israel won’t be able to do the things they’re being called to do, and that the result will be exile in a foreign land.

But he offers a glimmer of hope – at any point they can turn back to God and he will restore them and bring them back to him (30:1-4).  Not only that, but one day God promises to fix the hearts of his people so that they can love God, and fine true life and rest in Him.

And it’s this work of the heart God does ultimately for people through the work of Jesus in the New Testament, as his Spirit renews and transforms those who acknowledge him as Lord & King.  For those who trust in Jesus, true rest and life is found in him.

THE STRUCTURE OF THE BOOK

But how did we get here?  And where is exactly is “here”?  If you’re like me, you’ve got a lot of questions like these, and more.  And I reckon it’s helpful to go back and outline the story so far, and how the book of Deuteronomy fits in terms of its relationship to the Pentateuch (the first 5 books of the bible), and the rest of the Old Testament.

FIG 1 – Wilderness wanderings and the setting of Deuteronomy 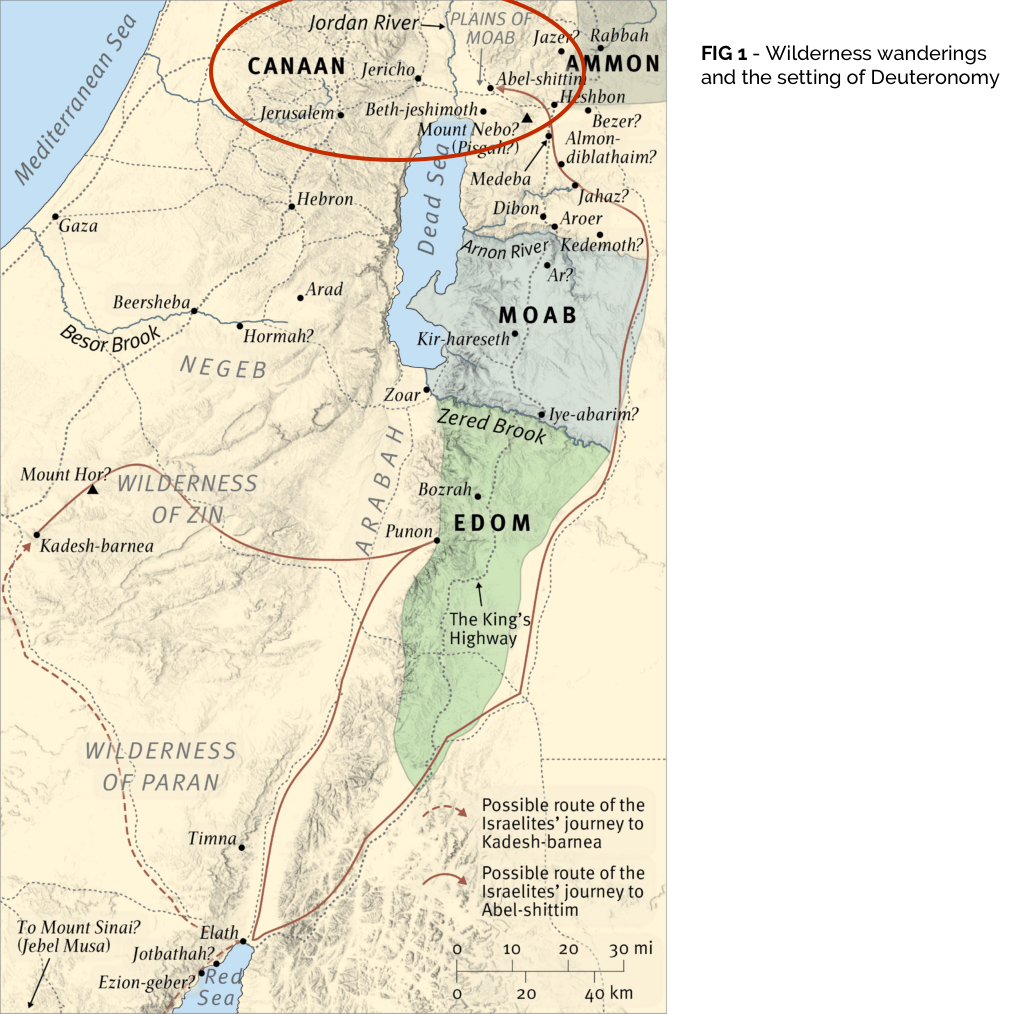 A FLYING OVERVIEW OF THE STORY OF THE BIBLE SO FAR 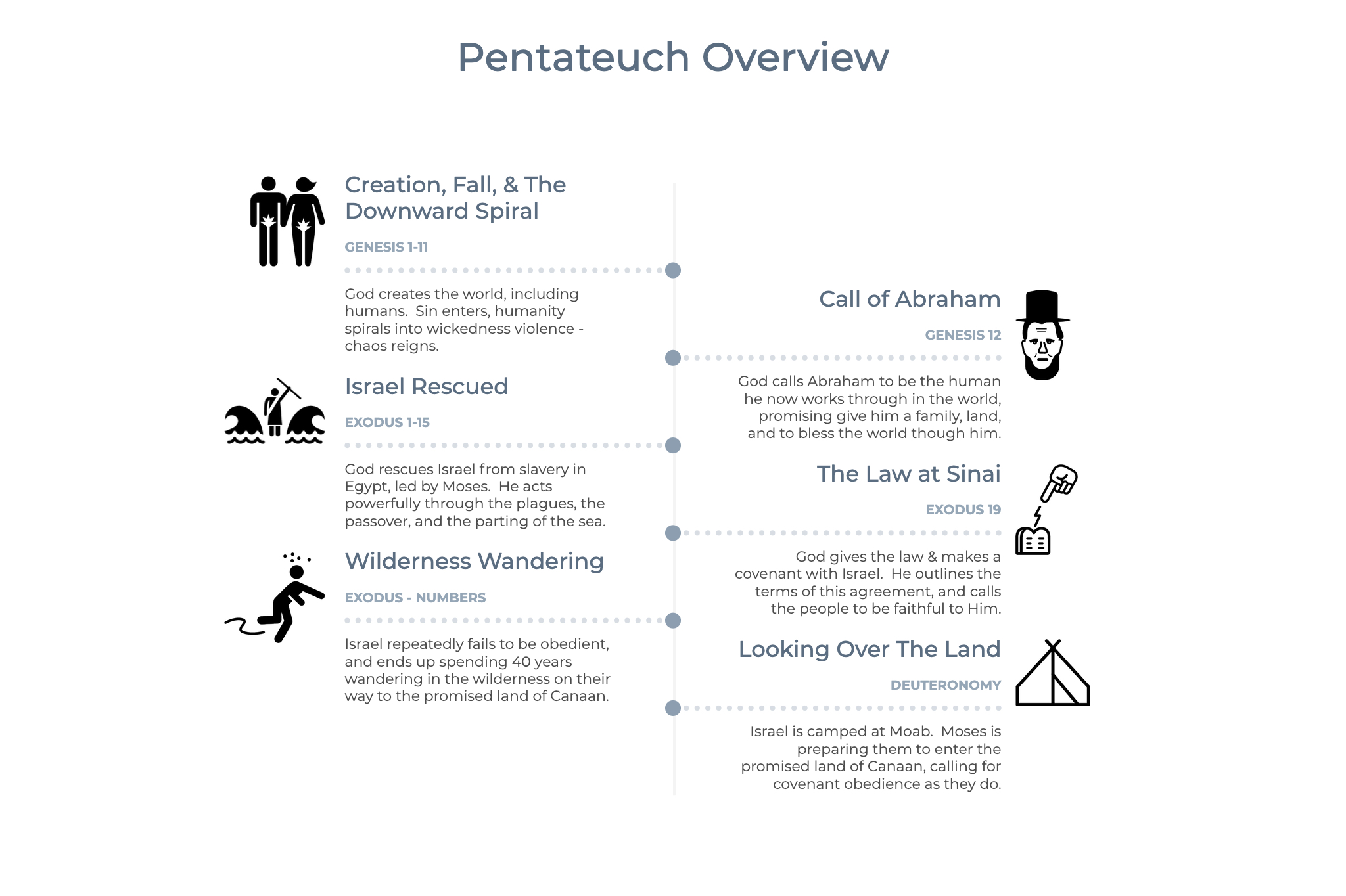 In Genesis we begin with the creation of the world and everything in it, and before long we see the rebellion of humanity against their creator.  Chapter 12 sees the story zoom right in as God chooses one man, Abraham, and his family to be the recipient and vehicle of his blessing.  This is the beginning of God’s solution to the problem of a rebellious and sinful humanity.

This family becomes the nation of Israel, God’s chosen people, through whom He will bring His blessing to the nations.

When we jump into the book of Exodus, we find that the nation of Israel has grown significantly, and through a series of unfortunate (but God ordained) events, has also ended up in slavery in Egypt under Pharaoh.

God raises up a man called Moses to be His instrument of rescue and lead Israel out of slavery.  And in chapters 12-14 God does just that – He powerfully rescues Israel when he parts the Red Sea, and Israel rejoice and put their trust in Him.

In chapter 19, the people arrive at Mt Sinai, where God gives them his law, making a covenant – a binding agreement – with them.   If they will obey him and keep the terms of the covenant, Israel will be God’s treasured possession out of all the nations.  And the people agree. (See Figure 2).

From Exodus 20, through Leviticus, to the end of numbers, we see God give the law to Israel – and Israel agrees – but they fail to be obedient.  God gives more laws, sets up the tabernacle and sacrificial system,  but again and again Israel don’t keep up their end of the deal.  And so when they leave Sinai, and wander in the dessert for 40 years on their way to the promised land (a trip that should have taken 11 days!).

It’s a long journey full of rebellion and disobedience on Israel’s part, yet repeated patience and grace on God’s part.  What we see is God’s faithfulness to His covenant, despite Israel’s unfaithfulness.  We see His commitment to the promises He has made, and to the people He has chosen to work through in the world.

At the end of Numbers, Israel has finally almost made it to the edge of land.  They’re camped on the plains of Moab, which is across the Jordan from the promised land of Canaan.  And it’s here that we pick up the story at the beginning of Deuteronomy.

Before they cross the Jordan and enter the promised land, Moses rallies the people to remind them of God’s law—and why obedience to Him matters as they settle in their new land.

FIG 2 – Route of the Exodus from Egypt 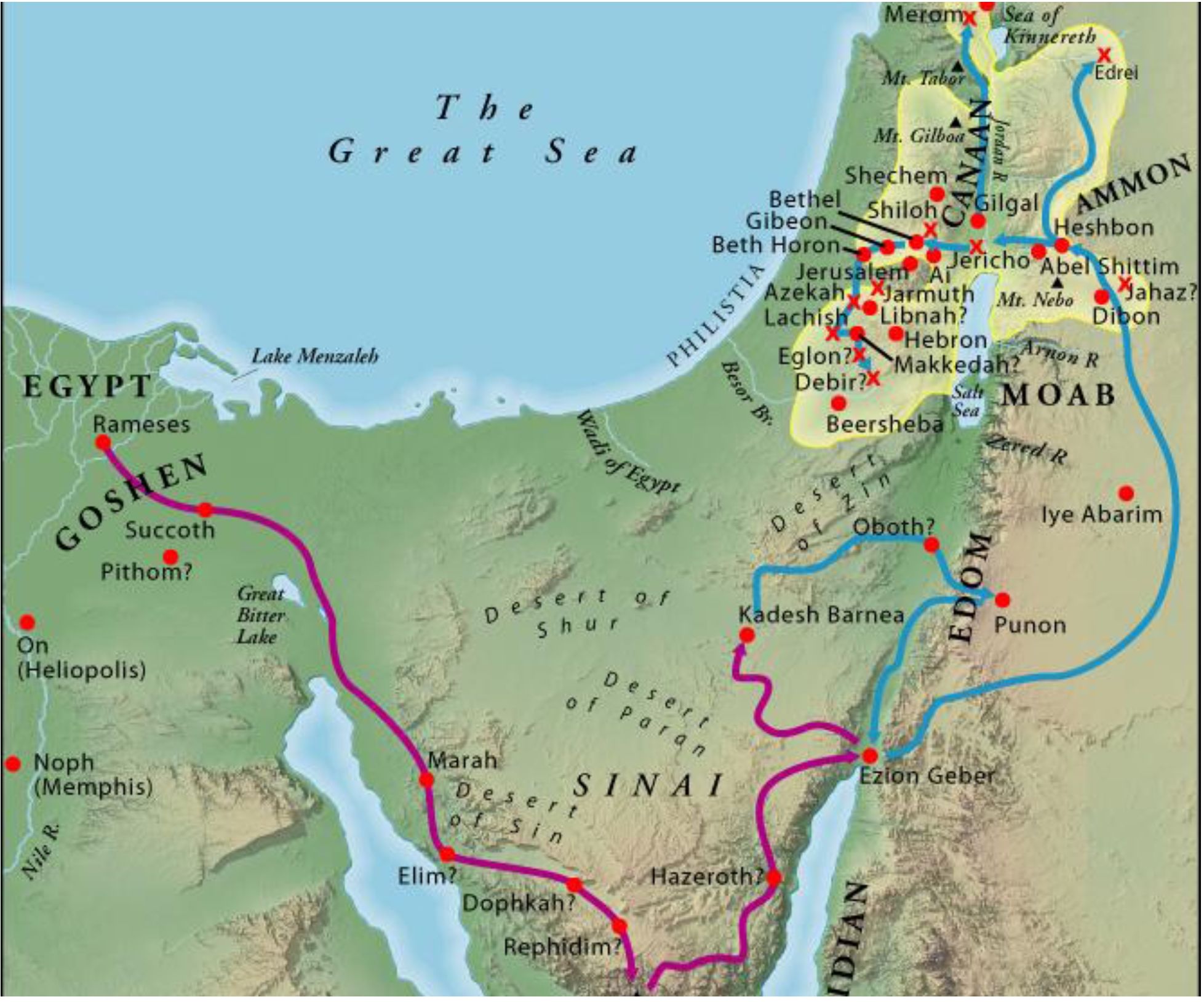 For a helpful overview of the book of Deuteronomy, check out this video from The Bible Project – or go to dpc.cc/deutoverview